I apologize. This was supposed to be brief, but it turned into something else. It happens. I hope you’ll still read on.

My boy is about to leave for the holiday break to spend time with his sperm-donor of a father. That sperm donor rarely calls, and only sees my boy a couple times a year. We have no legal custody arrangements, so we try to just work things out. When he manages to have the time and money to see Lucas, I try to allow it. The sperm donor isn’t literally a sperm donor, btw. I was actually in a relationship with him for nearly 5 years. He was emotionally and verbally abusive about 4 of those 5 years, and when I was pregnant and after Lucas was born, he was at his worst.

Abuse takes on many forms. Someone doesn’t have to be physical with you to be an abuser.

I won’t get into the details of how he treated me. Just know that more days than not, I was crying and hating myself because of something he said. He made me feel like I was crazy. He knew that and used it to his advantage.

The last time we talked, about 3 weeks ago, he was telling me of his tentative plans for the holiday, and said he was about to get plane tickets for the 22nd to come get Lucas. I was fine with that. 3 weeks go by and I don’t hear from him, and we are making plans here in our home for our family celebration before all of our kids leave (Chris’s boys also go with their mother for the holidays, so we’re going to be alone for 2 weeks. We should be excited about that, but we’re not.)

The sperm donor calls yesterday and tells me that he’s booked a flight for the 21st. That’s tomorrow. A Friday. The day of our family plans, and Lucas’s class party in school.
This piece of garbage has gone and made plans without talking to me, and is ruining our plans in the process. He sees no problem with Lucas missing a day of school. He didn’t consider for a moment that maybe we should have discussed this change of plans first.

He also tells me that he had no way of contacting me the entire 3 weeks because his phone and internet were out. Yeah right.
He thinks I’m stupid, and he knows that I can’t stand up to him. He knows that, and takes full advantage.

This sudden change of plans throws us all off. It causes an immediate fight between the hubs and I, because he hates that I can’t just stand up to my ex.

If only it were so simple. If only. If it was so simple to just stand up to him, I would have done it years ago, and saved myself all of that abuse.

Me and my boy at home. Right where he belongs.

Now Lucas is sadder than he already was, because he doesn’t want to go in the first place; and now he has to miss out on things that he’s been looking forward to. And when my baby is sad, I’m sad. And when I’m sad over something that the hubs seems to think I can easily change, then he gets angry. No one is happy, and I am being made to feel that it is all my fault because I can’t stand up to my abuser. I can’t stand up to him. That is a correct statement.

Why not? Well, it’s as simple as fear. I am afraid. It’s not rational fear, but that doesn’t make it any less real for me.
I want to be able to stand up to him and tell him that I will not allow him to take my son away from his family a day early. If I do that though, I know more trouble will come of it, and Lucas will have to feel the effects of that. I don’t want to make things easier for my abuser, but I also don’t want to make things more difficult for my son.

I am feeling so torn and hurt and broken today. I just want my boy to be happy, and it seems I am failing even at that. To top it off, my husband is upset with me, and I feel completely helpless.

I had a couple of good conversations last night with some friends of mine. One of them is my very dearest friend, Amanda, who only wants to comfort and offer up helpful ideas. She understands what it’s like to be in my position, as her daughter’s father is a sperm-donor type of guy. I am so blessed to have Amanda’s friendship and support. It means the world to me.

Another friend, Mike,  is an old high school friend who just so happens to have experience counseling abused women. He’s an outstanding human being, and I am so lucky to have been able to keep in touch with him after all these years. He offered up support and reminded me that I am not weak and that my fear is valid, but that I do indeed have to work through it and not let it control me. He knows those things take time. He understands that it’s not as simple as “Just get over it.”
I am grateful to him for taking the time to talk to me when I was feeling so defeated.

Just a few more things, and I’ll be done. I promise.

For anyone who is a survivor of domestic abuse of any kind (physical, verbal, emotional, etc.)-

You are not alone. No matter how shitty and weak and pathetic the people in your life make you feel about “allowing yourself” to be abused, you are none of those things. And you are not “allowing” anything. You have been hurt, and that hurt leaves scars. Healing takes time.

If you have escaped your abusive relationship, then you’ve made progress. You are strong.

If you have learned to manage your emotions about your abuser, and are able to not fall apart at the sight or sound of every trigger, then you have made progress. You are strong.

If you still cry, or aren’t quite capable of standing up to your abuser yet, that’s okay. It does not make you weak, and it does not mean that you are “letting them” control you. 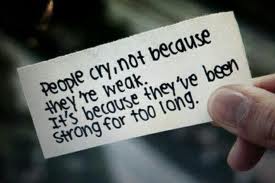 You have been traumatized.

You can work through it. It may take time. That is okay.
We’re all going to be okay.
We just need to take it one step at a time.

A fellow blogger and friend posted this song on my wall today. It seemed random and all too coincidental. It is the perfect song for how I’m feeling right now, and felt like I should include it in this post. Thank you to So Much for the Mother of the Year Award for your thoughtfulness in sharing this song with me today.